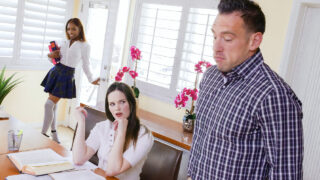 After Jenna Ross betrays the trust of Sarah Banks, Sarah looks to take her mind off of the ordeal by fucking a hot older guy. She ends up in the embrace of Johnny Castle, who takes Sarah to places she’s never been bef...

When having a baby is no option, Johnny Castle and Jenna Ross decide to become foster parents to orphan teen Sheena Ryder. Giving her a home in exchange for her carrying their baby seems like a fair trade to them!

Sheena Ryder, Jenna Ross and Johnny Castle may be a new family, but they are committed to making it work. Johnny, being a psychologist, knows exactly the kind of attention his step daughter needs in order to be a regu...

Jenna Ross walks around her house in her underwear like she owns the place. Stepbrother always notices and saves those mental pictures for his spank bank. Besides that, she always touches him and finds some way to act...

Jenna got a note from her teacher asking her to come by her house to discuss her academics. She thought she was in huge trouble and as she walked up to her house she ran into Jesse. They greeted each other and wondere...

Jenna J Ross Gets Busy In The Office Jenna J Ross is having a rough day, seems to be the norm with her. It's distracting to her co-worker, Bruce. Come to find out her terrible dating life is really starting to take a...

After stringing him on and holding out sex for as long as possible, Jenna J Ross finally pays Chad White a little visit at his office. With nothing but a trench coat on and lingerie, Jenna J Ross is ready to finally g...

Jenna Ross and Jennifer white have not been doing great in school lately, so they decided to enlist their fathers to be their own personal tutors! After hours of studying everyone had just about reached their breaking...

Favors always pay off! This sexy young thing had a flat tire, but her ass in those shorts was plump as could be! I gave her a lift home and she gave me road head, but wasn't satisfied until I gave her a load to the face!